At last a pesticide ban

At last a pesticide ban

The European Union will ban the world’s most widely used insecticides from all fields due to the serious danger they pose to bees.

The ban on neonicotinoids, approved by member nations on Friday, is expected to come into force by the end of 2018 and will mean they can only be used in closed greenhouses.

Bees and other insects are vital for global food production as they pollinate three-quarters of all crops. The plummeting numbers of pollinators in recent years has been blamed, in part, on the widespread use of pesticides. The EU banned the use of neonicotinoids on flowering crops that attract bees, such as oil seed rape, in 2013.

But in February, a major report from the European Union’s scientific risk assessors(Efsa) concluded that the high risk to both honeybees and wild bees resulted from any outdoor use, because the pesticides contaminate soil and water. This leads to the pesticides appearing in wildflowers or succeeding crops. A recent study of honey samples revealed global contamination by neonicotinoids.

Vytenis Andriukaitis, European commissioner for Health and Food Safety, welcomed Friday’s vote: “The commission had proposed these measures months ago, on the basis of the scientific advice from Efsa. Bee health remains of paramount importance for me since it concerns biodiversity, food production and the environment.”

The ban on the three main neonicotinoids has widespread public support, with almost 5 million people signing a petition from campaign group Avaaz. “Banning these toxic pesticides is a beacon of hope for bees,” said Antonia Staats at Avaaz. “Finally, our governments are listening to their citizens, the scientific evidence and farmers who know that bees can’t live with these chemicals and we can’t live without bees.”

Martin Dermine, at Pesticide Action Network Europe, said: “Authorising neonicotinoids a quarter of a century ago was a mistake and led to an environmental disaster. Today’s vote is historic.”

However, the pesticide manufacturers and some farming groups have accused the EU of being overly cautious and suggested crop yields could suffer, a claim rejected by others. “European agriculture will suffer as a result of this decision,” said Graeme Taylor, at the European Crop Protection Association. “Perhaps not today, perhaps not tomorrow, but in time decision makers will see the clear impact of removing a vital tool for farmers.”

Neonicotinoids, which are nerve agents, have been shown to cause a wide range of harm to individual bees, such as damaging memory and reducing queen numbers. 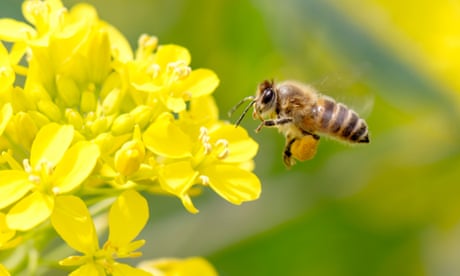 But this evidence has strengthened recently to show damage to colonies of bees. Other research has also revealed that 75% of all flying insects have disappeared in Germany and probably much further afield, prompting warnings of “ecological armageddon”.

In November, UK environment secretary Michael Gove overturned the UK’s previous opposition to tougher restrictions on neonicotinoids. “The weight of evidence now shows the risks neonicotinoids pose to our environment, particularly to the bees and other pollinators which play such a key part in our £100bn food industry, is greater than previously understood,” Gove told the Guardian. “I believe this justifies further restrictions on their use. We cannot afford to put our pollinator populations at risk.”

Emi Murphy, Friends of the Earth, said: “This is a major victory for science, common sense and our under-threat bees. The evidence that neonicotinoid pesticides pose a threat to our bees is overwhelming.”